Geographically Jamalpur is located at 25.3°N latitude 86.5°E longitude. It is elevated at 151 meters above sea level. The city lies in Munger district and is well connected to other parts of Bihar. There is a road and rail link between Munger and Jamalpur. The nearest airport to Jamalpur is at Patna. From Patna, it is four hours by rail to Jamalpur. Just like other parts of Buhar and India Jamlpur also witnesses Summer, Monsoon and Winter season. 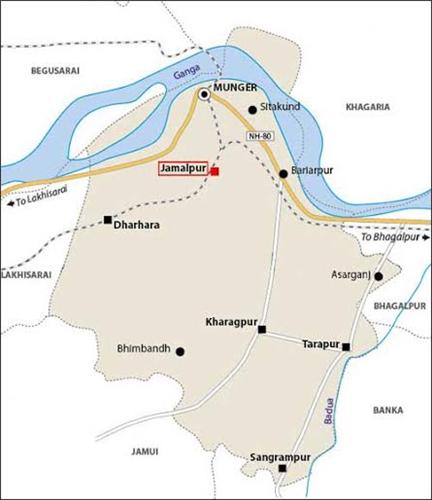 Jamalpur experiences subtropical climate. This type of climate ultimately becomes the most suitable one for agricultural growth. The region witnesses three different seasons that is Summer which extends from March to June, Monsoon remains active from mid June to September and then Winter which covers the month from October to February. While during summers temperature may rose upto 45°Celcius, it may drop down to 5-10°Celcius during winters. The average annual rainfall of Jamalpur is around 1146.4mm, out of which 80 percent of rainfall is received during the monsoon season along with the rest of more than 5 percent is received in the summer season. The rainfall in Jamalpur is mostly affected by the south-west monsoon which occurs on the second week of the month of June and continues till the end of the month of September. The month of July and August receives the maximum amount of monthly rainfall in not only Jamalpur but the whole of Munger district.Many a times cyclonic rain also occurs during this time.

As a result of the agro-climatic zonal planning based on the agro-climatic features especially the soil type, rainfall, temperature and its variation with water resources, this district falls exactly within the region, which can be described geographically as the South Bihar Alluvial plane.The type of soil found in this city ranges from grey to dark grey in color and in terms of texture it is medium to heavy and also slightly too moderately alkaline in reaction and cracks during summer. This soil turns shallow during the monsoon, with clay content reaching nearly 40% to 50% all throughout the profile. In level land or depression, a slicken side along with the wedge shaped aggregates absorb the soil. This soil turns bonding during the summer season and remains the same during monsoon. The soil also has a good fertility status. The minerals found in this type of soil are smectite, hydrous mica, kaolonite and chloride. The structure of sediments deposited in this soil eventually turns finer.These are generally layers of sand at different department which do not go deeper than 40 to 60 cm of surface level due to the changing course of the current. This soil also ultimately becomes the reason for the exquisite greenery found in Jamalpur.